Margaret Thatcher - The Heroine of Brexit

May 27 Posted by Ethan Thoburn in European Union 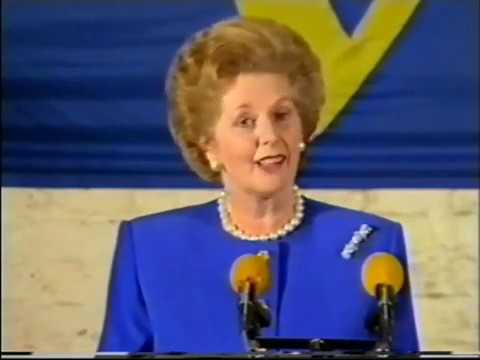 The Bruges Group was set up in 1989 in honour of one speech, a now landmark address made by our then Prime Minister Margaret Thatcher to the College of Europe on 20th September 1988 on the 'Future of Europe'. Lady Thatcher influenced the creation of the Bruges Group, one of Britain's most recognised political and economic think tanks. The Bruges Group set out the intellectual case for departing the European Union and with the support of countless former and serving Cabinet Minister as well as MPs, businessmen, journalists and politicians the Group were one of the key players in the 2016 EU Membership Referendum. It was the Iron Lady's view of Europe and the direction the EEC were taking that inspired a generation of politics and the Bruges Group has been there ever since that now famous speech in Bruges. All of her predictions on the course the European project would become reality at some point or another, from further integration to a single currency, she of course vehemently opposed both. Without Margaret Thatcher and the generation of thinkers, politicians, journalists and think tanks she inspired, Britain would've never have left the European Union, we might well have even been sucked further into this disastrous and failing entity.

As the Founder President of the Bruges Group, Lady Thatcher's closest allies such as Norman Tebbit, Norman Lamont, Peter Lilley, Sir John Redwood and Sir Bill Cash spearheaded the case for political and economic freedom while fighting the analytical and theoretical battle to leave the European Union. Many leading politicians have recently emphasised the importance of Lady Thatcher in the Eurosceptic cause, ranging from Jacob Rees-Mogg to Priti Patel to Nigel Farage, Suella Braverman, Mark Francois and Andrew Rosindell.

In her aforementioned Bruges Speech, she made clear the EEC planned on not only creating an economic community but also creating a political union under a technocratic bureaucracy. The Iron Lady spoke of how "we have not successfully rolled back the frontiers of the state here in Britain, only to be reimposed at European level with a European superstructure exercising a new dominance from Brussels." However, those frontiers of the state are being reimposed on a grand scale in the EU, only this time it is Ursula von der Leyen and before her, Mr Juncker instead of Commissioner Delors. Thatcher knew fine well that the EEC was heading towards a political union, especially with Delors as the appointed Commissioner, the superstructure that she spoke about is more evident now more than ever with plans for a EU central defence policy and further integration proposed by President Macron and plans already put into motion by Chancellor Merkel.

The speech in question set out three guiding principles of "willing co-operation between independent, sovereign states", "perusing policies that relate supply more closely to market requirements" and the "need for the Community to encourage enterprise". The former PM suggested reforms to the Common Agricultural Policy back in 1988 yet little has been done to act upon those advisories. The points that were outlined is that the CAP sees a minimum price imposed and that around two thirds of the budget in the 1980s was spent on storing and purchasing food as part of the CAP. Still to this day, the CAP is one of the most unfair and regressive policies of the European Union.

Thatcher is often portrayed as ahead of her time with supply side policies and monetarism which created a prosperous and efficient economy as well as making London one of the world's two financial centres. Lady Thatcher reduced overmanning in the public sector to boost productivity and increase competition with her flagship policy of privatisation and the sale of council houses and increased share ownership. Thatcher was also ahead of her time when it came to Europe, predicting the failure of the Exchange Rate Mechanism, or as Norman Tebbit put it the "eternal recession mechanism", Thatcher herself caused a significant conflict leading to the resignation of both her economic adviser Alan Walters and Chancellor of the Exchequer, Nigel Lawson. Thatcher had predicted the failing of the ERM in the mid-1980s as soon as the idea of a monetary mechanism was discussed, Thatcher even suspected a monetary union would "take away a country's identity", a point that was also made in the Bruges speech. Thatcher's resistance to joining the ERM caused conflict in the cabinet with all three of her Chancellors across her premiership, Sir Geoffrey Howe, Nigel Lawson and John Major, as well as other ministers such as Ken Clarke; those conflicts would eventually see Howe and Lawson resign but it was Mrs Thatcher who proved to be right in the end with Black Wednesday being a timely reminder on how a fixed exchange rate could never work.

But it wasn't just the failing ERM that the Iron Lady predicted, it was the whole direction of Europe, "suppressing nationhood to the power of a central European conglomerate would be highly damaging" and so we have seen in today's climate. The EU under Jean-Claude Juncker's Presidency saw plans for further integration to a European superstate with the French and Germans as pioneers. And now as we enter trade talks, spurred on by Angela Merkel and Emmanuel Macron, Michel Barnier is continuing that stubborn position held by the EU, which is in neither party's interest. Mrs Thatcher would often go to Brussels and demand change to policy to benefit Britain, something we have seen too little of since her departure until recently.

Margaret Thatcher described Europe's policies as "an inclination towards bureaucratic rather than market solutions to economic problems" and an "overt federalist and protectionist agenda" something which seems ever more apparent as time goes on. Thatcher said herself that Britain had joined the Community in the 1970s to "deregulate and free the markets by removing constraints on trade" however, by the late eighties Thatcher took a different view and spoke of how the EEC had not embraced free markets and instead were ploughing towards centralisation, more regulation and more state intervention. The EU has penalised entrepreneurs and crippled industries with red tape and regulation as well as doing exactly the opposite of what Mrs Thatcher advised "detailed planning does not work, and that personal endeavour and initiative do".

In addition to this, the PM said how "Europe should not be protectionist" and now we see all 27 nations (after Britain leaves) being forced to comply with endless regulation, quotas and targets set out by the Brussels bureaucracy.EU states are unable to negotiate favourable trade deals with other superpowers such the US due to the EU's one size fits all policy; a trade policy destined to fail. The truth is that all nations' trade terms are different, here in Britain services are our greatest export whereas Germany relies more on automobile exports, therefore a single trade policy set out by a central body is not going to succeed.

And then of course we have the biggest failed project of all, the euro, single currency with a central bank. You don't need to be a financial expert, economist, or politician to realise that this project was a doomed one from the word go. However, at the time Labour told us that if we didn't join then it would be us in crisis, looking back it's the best thing, we never did. It was in her 2002 book 'Statecraft' that Mrs T predicted the failing of the Euro saying how "this project is essentially political, rather than economic". It was plain to see, by placing contrasting economies such as strong economies like Germany with collapsing economies in the instance of Greece, France and Italy that disaster would follow. The 2008 financial crisis nearly sent the whole Eurozone into collapse due to the stark contrast of economies using the single currency. The EU continued to dictate, and still does to this day, the budgets of Greece and Italy, placing them into special austerity measures which has caused serious political unrest and a rise of extremist parties. Baroness Thatcher put it "without the power to issue and so to control one's own currency a state can no longer be said to determine its own economic policy", exactly the case which we've seen all across the EU and Eurozone in the last 10 years.

In essence, Mrs Thatcher has consistently predicted the correct outcome of flagship EU policies, not to mention the fact that she wrote in her autobiography that "she would have never signed the Maastricht Treaty if she were PM". From the failing of the ERM to the failing of a single currency and to the direction of the EU bureaucracy, the Iron Lady has been spot on the money. In her famous House of Commons speech in 1990, Thatcher argued how the "Commission wanted to increase its powers with the European Parliament as the democratically elected body, the Commission to be the executive and the Council of Ministers to be the Senate. No! No! No!" and as we look back on that speech nearly 30 years later it shows astounding resemblance to what the plan is for the EU now. Baroness Thatcher was way ahead of her time and her predictions on the EU have near enough all been a direct map of what has happened over the last three decades following her departure from office.

We can be certain how Lady Thatcher would've voted in the 2016 referendum, and that would be of course be a Leave vote. She made clear in her later speeches that she was staunchly supporting Britain's departure from the EU, most notably at her speech at Party Conference in 2002, and then in a now famous communication with veteran Brexiteer MP, Sir Bill Cash. She was one of the earliest Brexiteers. Her friend and former Cabinet Minister, Lord Tebbit said how he thought it was "beyond doubt" that Britain's greatest peacetime leader would've chosen to leave the grasp of the ever growing and ever more centralised European Union. Her Bruges Speech in 1988 set the tone for British Euroscepticism before it became a mainstream idea. Her opposition to the ERM before later leading the charge from Parliament's upper House against the Maastricht Treaty in 1992 and 1993 would cement her position as one of Britain's first Brexiteers and one of the brightest beacons of Euroscepticism. Lady Thatcher is without a doubt one of the most key figures in Britain's decision to leave the EU in 2016 even though she had unfortunately passed away three years prior to the referendum; she inspired a generation of politicians and instilled core anti-EU sentiments in several of today's political leaders, including 'Mr Brexit' himself, Nigel Farage and Vote Leave big hitter and now Home Secretary, Priti Patel.