Devil and the Deep Blue Sea 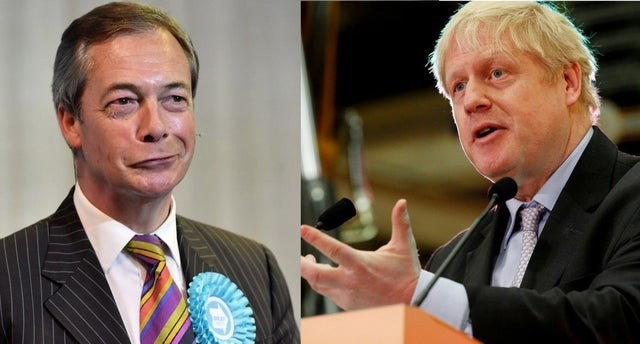 Eventually we have a Brexit deal that has been approved by the partisan Parliament, in what is hopefully their last ever appearance on our television screens for some of this current batch of members. As was doubtless their intention, they have left the government, and Boris in particular, with a major problem, and many of those who have deliberately caused this will not be in Parliament to face the music as they will either not stand again, or will be deselected by their respective parties. In order to get the deal approved, Boris had to give a great deal of ground, and the resulting agreement is not necessarily what I and many others would have wished for, as it still does not place sufficient distance between ourselves and the EU. However, having said this, the deal on offer is, I suspect, the only deal we are likely to see, and the choice is now basically 'take it or leave it.'

The problem with opposing the deal, as Nigel Farage has indicated he will do (Yorke and Hope, 2019:1), is that we are no longer only fighting Brussels, as there is a General Election looming in early December. To oppose the Conservatives on the grounds of an inadequate Brexit escape may well be logical, but equally (as the ERG appears to have accepted), it is unwise. If the Brexit Party reduces the Conservative vote, then the only beneficiaries will be Corbyn and the Liberal Democrats. If either of these two alternatives are able to form a government, then we will never see Brexit in our lifetime ... and if not in our lifetime, then never! Labour under Corbyn's leadership will support the direction of the prevailing wind and will confirm its intentions after the event. The Liberal Democrats have already indicated that, despite their name, they have no desire to support the democratic decision to leave. The SNP is more concerned with leaving the UK than it is with respecting the votes of Scottish fishermen, and the Welsh appear to have forgotten that as a nation, they had the second largest percentage of 'leave' votes in the UK, after England.

Thus, whilst it pains me to say it, were I given the opportunity I would support the 'Boris Agreement' – if only in the hope that the Conservatives will be returned with a substantial majority, which will allow the new Parliament to overturn the restrictions imposed on it by the rag-bag of 'remoaners', Brussels 'Fifth Columnists', and the arrogant Establishment. If this can be done then there exists the hope that, within the first year of the new Parliament, and buoyed by a healthy majority, Boris can take us out of the EU properly – if need be, by simply leaving without a deal.

Surely the arch – Brexiter Nigel Farage must understand this? By opposing the Conservatives, he may well condemn the country to Marxism under Corbyn, and the purgatory of indefinite EU membership?